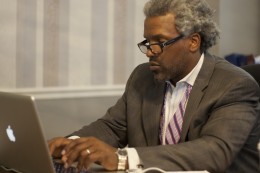 Perkins also does sports entertainment law, and lists among his former clients, Floyd Merriweather Jr., a middleweight champion boxer and Michigan native. “When you build a relationship with your client, there’s an element of trust,” he says. “You have to love the people you serve. These are the sine qua non of any professional services relationship, particularly one with an attorney.”

Perkins has created a law firm in the heart of downtown Detroit, The Perkins Law Group, comprised of eight top notch, aggressive lawyers, who offer the first-rate legal services of a big-player law firm and the personalized, unique service of a boutique firm. “Every client is important and gets treated like family,” he says.

Perkins has an eclectic background. He’s no ordinary attorney. One of six brothers, he grew up in Detroit and played defensive back and receiver for University of Detroit High School. Then it was off to an Ivy League school, Dartmouth College in Hanover, N.H., where he studied history. While at the school, he was a walk-on for the football team and played running back, and he studied abroad in France.

After graduation, and before he went off to law school, he taught French for a year at the Peace Lutheran School, K-8, on Detroit’s east side. “I saw minds growing. It was a privileged opportunity to see young people developing and a willingness to embrace foreign concepts.” After that, it was off to the University of Detroit Law School where he also worked in the law library. Even after graduating in 1996, he worked there until 2004 and taught University of Detroit students how to operate in court.

“There is a passion for teaching, which is incorporated in the manner in which members of PLG serve our clients,” Perkins said. “Our belief is, that through education, a client is stronger and in a better position to protect their legal interests.”

While in undergrad, he worked for NBD bank in different departments. “I thought I might go into the financial industry, ” he said. “As an avocation, I have created a small hedge fund and the focuses is on foreign currency trading and arbitrage and real estate investment. I have an interest in financially growing wealth for individuals.”

After graduating law school in 1996, he passed the bar and started this law firm. At first, he handled a lot of criminal cases. Then he broadened his practice, doing civil cases and transactional law.

“The experience I’ve had in law has taught me about the human condition,” he said. “It has made me more circumspective, more rounded, more of a whole individual.” Espousing his philosophy about his practice, he says, he tries to determine exactly what the client wants, be it to fight in court or resolve a situation out of court. What the client wants, tempered with reasonable and possible expectations, is critical in the ultimate service of the client.

“My purpose is to increase my understanding of the client. My dad, who was not a lawyer, gave me a piece of advice that was better than any lawyer could have given me. He said the practice of law is always about the management of the expectations of your clients.” He said, for example, if a client wants a million dollars for a slip-and-fall, “my job is to get their information and educate them on the reality of the situation.”

“They have to trust their lawyer,’ he said. “But it is equally important for the lawyer to earn trust of the client.” Perkins is married and has 2 children. When talking about inspirations in his life, Perkins says, “First God. He is the center of my life.” He also points to his parents. “My parents showed so much love for us. “

He said over the years his father, who passed away in 2002, was a big-time contractor, who was also a barber like his father. His father attended Wayne State University in the 1950s, but quit to work and support his family. He returned to Wayne several decades later and graduated in 1998 with one of his sons, Sean, who is a lawyer at the law firm.

“He was the most inspirational person in my life,” he said. “My relationship with him has made me a better lawyer.”