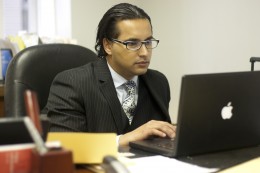 Mohammed A. Nasser was destined to become a lawyer.

It was evident while growing up in Toronto. At age 16, the sharp-witted teen put on a suit and went to court to fight a traffic ticket.  He won. “When I was done, the judge said to me ‘ Have you ever thought about pursuing a career in law? I said ‘yes.’ That was a defining moment. I definitely knew I wanted to go into law.”

From that point on, he set off on a path to become a lawyer. He graduated with a Bachelor’s Degree from the University of Toronto with areas of focus in Political Science, Psychology and Criminology. Following his undergraduate education, Mohammed entered Thomas M. Cooley Law School. He graduated through a two-year, accelerated program. While in law school, he interned with Judge Colleen O’Brien at the 6th Circuit Court of Oakland County.